I would suggest invite new/regular players on our TF2 server to our community.. Slowly they can join our community and we can have good admins and members on TF2 server also.

Send me all the details so I can get with the Advertising Committee so we can get this noticed by all. 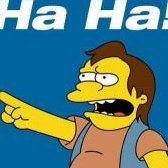